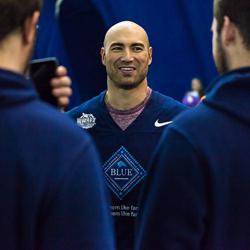 NFL linebackers Ben Leber and Nate Gerry will lead a tackling clinic hosted by the Sanford POWER Football Academy by Riggs Premier Football from noon - 2 p.m. on June 26 at the Sanford Fieldhouse.

This clinic is designed to enhance tackling skill and technique with an emphasis on safety. Using various non-contact drills, we will break down tackling into all of its phases to improve athletes’ confidence and performance with this essential skill.

Leber, who was raised in Vermillion, spent 10 seasons in the NFL playing for the San Diego Chargers, Minnesota Vikings and St. Louis Rams. During his career, he recorded 496 tackles, 24 sacks and five interceptions. He retired after the 2011 season.

Leber will also help coach the football camp held at the Dakota Dome in Vermillion on June 27th.

Gerry, a Sioux Falls Washington graduate, was drafted in the fifth round by the Philadelphia Eagles in 2017. The former Nebraska Cornhusker helped the Eagles win Super Bowl LII against the New England Patriots in his rookie season.

For more information on costs, other available camps, and registration, click here.