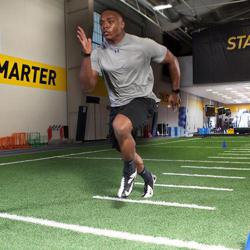 Minnesota Vikings players Adam Thielen and CJ Ham have been added to the list of celebrities for the 2017 Hy-Vee/Sanford Legends free football clinic on June 9.

The clinic takes place at Kirkeby-Over Field on the campus of Augustana University from 1-3 p.m.

The running back clinic, featuring CJ Ham, will take place June 26 from 5-7 p.m. at the Sanford Fieldhouse in Sioux Falls. Detroit Lions running back Zach Zenner will also participate in the clinic.

The clinic is open to students in grades K-12 and costs $20. Registration can be found at www.SanfordSports.com.

Ham is entering his second season with the Minnesota Vikings. The Augustana University graduate did his pre-professional training at Sanford POWER and turned that into a tryout opportunity with the Vikings. The Vikings invited Ham to mini-camp, and he ultimately spent the entire 2016 season with the team, advancing from the practice squad to the active roster.

The wide receiver clinic, featuring Adam Thielen, will take place June 27-28 from 4-6 p.m. at the Sanford Fieldhouse in Sioux Falls. Thielen will be at the camp June 27.

The clinic is open to students in grades K-8 and costs $60. Registration can be found at www.SanfordSports.com.

Thielen is entering his fifth season with the Minnesota Vikings. The Minnesota State University, Mankato graduate is one of the newest members of the Sanford Health family. He will work with the Sanford Sports Science Institute on the topics of sports performance and sports research.

Thielen, originally an undrafted free agent, recently signed a multi-year contract with the Vikings. He posted career highs in 2016 with 69 receptions for 967 yards while catching five touchdowns passes. He caught 12 passes for 202 yards and two touchdowns against the Green Bay Packers on December 24, 2016.