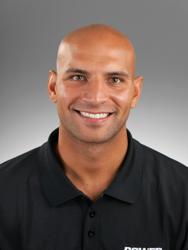 Coleman has led the POWER Basketball Academy in Fargo since 2019. He is a former standout basketball player for North Dakota State University, helping the Bison reach the NCAA Tournament in 2009 before coming back to his alma mater as an assistant coach in 2013.

Prior to that, Coleman was the top assistant at Concordia College in Moorhead, Minnesota, for the 2011-12 and 2012-13 seasons. He played three seasons at NDSU from 2007-11, appearing in 31 games for the 2008-09 Bison team that won the Summit League championship and advanced to the NCAA Tournament. He missed his junior year with an injury and averaged a career-high 8.1 points, 4.8 rebounds and 2.3 assists as a senior in 2010-11.

A native of St. Paul, Coleman graduated from NDSU with a bachelor’s degree in sport and recreation leadership in May 2011. He will oversee basketball programming at the POWER academies in Sioux Falls and Fargo, located at the Sanford Pentagon and the Sanford POWER Center, respectively.

“In all our academies, we encourage opportunities and transformations that go beyond sports-based skills,” said Steve Young, president of Sanford Sports. “Freddy stands for personal development, leadership and sportsmanship – in addition to being an outstanding coach. He helps athletes develop as players, and more importantly, as people.”

The Sanford POWER Basketball Academy is a comprehensive player development program with a wide variety of basketball development options. From private workouts to team management and everything in between, the professional staff is knowledgeable, energetic, and creates a positive environment for players of all ages and skill levels to develop, learn and enjoy the game of basketball.

“I am pumped to take on the new role of director of the Sanford POWER Basketball Academies. As a former player, college coach and now trainer, my number one goal has always been to make a positive impact on people's lives through athletics,” said Coleman. “There is so much that we can teach athletes through sport that applies to their everyday lives moving forward. That is what really motivates me, and what will drive our basketball academies moving forward. With all the resources that we have at Sanford, we can and will create a top-notch experience for the basketball athletes that come through our facilities.”