Tickets will go on sale later. Television coverage will determine a start time.

Division I games take many months to negotiate and finalize, and this matchup was in the works before the COVID-19 pandemic began. The Sanford Pentagon will work closely with the schools and individual states and be ready to adjust based on guidelines and safety measures for all involved.

The contest will be Northern Iowa’s and New Mexico State’s first trip to the Pentagon, which has hosted 28 NCAA Division I men’s college basketball games since opening in 2013. Iowa and Oregon State are also slated to play at the Pentagon on December 22.

“Northern Iowa and New Mexico State are coming off incredible seasons with many of their core players returning, which makes for a great matchup,” said Steve Young, president of Sanford Sports. “We are excited to add another Division I game to our schedule and provide these two teams with a safe environment to compete while battling for an important non-conference win on a neutral court.”

A member of the Missouri Valley Conference, Northern Iowa is coming off a 25-6 season, and a first place conference finish with a mark of 14-4. The 2020 MVC Larry Bird Player of the Year, AJ Green (19.7 ppg), returns for the Panthers, along with First Team All-MVC selection, Austin Phyee.

“We are thrilled to be playing New Mexico State at the Pentagon. Scheduling is always a challenge and this game gives us a tremendous opponent in a great venue,” said Northern Iowa head coach Ben Jacobson. “New Mexico State has been terrific, they are extremely well-coached, play really hard, and will once again be in the hunt for their championship and a trip to the NCAA tournament. We want to thank everyone who helped put this game together and we look forward to a great game.”

New Mexico State finished the 2019-20 season with a 25-6 record, including a perfect conference season in the WAC (16-0) and 19 wins in a row to finish the year. The Aggies were scheduled to play Chicago State in the first round of the WAC Tournament before it was canceled due to COVID-19. New Mexico State returns All-WAC First Team selection Jabari Rice and its leading rebounder and shot blocker, Johnny McCants.

"We are looking forward to competing against UNI at the Sanford Pentagon. This is an excellent opportunity for us to play a high-caliber program at a great venue,” said New Mexico State head coach Chris Jans. “UNI is loaded with talented players and is led by a coaching staff that is considered one of the best in college basketball. The Panthers will likely enter the season as a top-25 program and will be the favorite to win the Missouri Valley Conference. We appreciate the staff at the Pentagon for all they did to make this game happen."

This will be the inaugural meeting between the two teams. 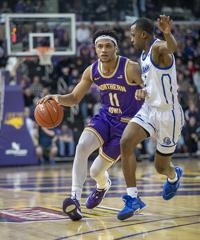