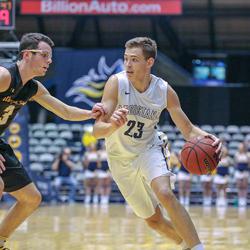 SIOUX FALLS, S.D. – With an NSIC-only schedule, the 2020-21 Augustana men’s and women’s basketball schedules have been released.

Season tickets are available now for football and basketball, while A-Club membership provides fans the opportunity to attend five other sports including volleyball, soccer & wrestling for free.  Our commitment to the health and safety of the Augustana community will drive our decisions with regards to spectators and fan experience. We will remain nimble and continue with our thoughtful approach in this evolving situation in the coming months

The season officially tips-off on Friday, Nov. 13, with a doubleheader at home against Upper Iowa. The following day, Winona State treks to the Sanford Pentagon.

After the initial road trip of the season to MSU Moorhead (Nov. 20) and Northern State (Nov. 21), the Vikings play inside the Sanford Pentagon one more time in the 2020 calendar year facing Minnesota Duluth and St. Cloud State on Nov. 28 and Nov. 29, respectively.

The Vikings then conclude the 2020 portion of their schedules at Minnesota Crookston, at Bemidji State and at Wayne State. The Wayne State contests will be set at a later date to be played between Dec. 10 and Dec. 20.

The NSIC will embark on a longer than normal holiday break before Augustana returns to the friendly confines of the Sanford Pentagon on Friday, Jan. 8. The Vikings host cross-town rival Sioux Falls in a doubleheader.

The Vikings then make their longest road trip of the season, spanning five games, including a Sunday, Jan. 10 doubleheader at Southwest Minnesota State.

From Jan. 29 to the end of the season, Augustana does not leave Sioux Falls, playing six games at home and one game two blocks from the Augustana campus at USF. The home stretch begins Jan. 29 and Jan. 30 with doubleheaders against Minot State and UMary, respectively.

After a Thursday night doubleheader at Sioux Falls on Feb. 4, it is four straight home dates for the Viking men and women. On Feb. 6, Augustana plays host to Southwest Minnesota State followed by Minnesota State and Concordia-St. Paul on Feb. 12 and Feb. 13, respectively.

In a change for the 2020-21 season, the NSIC Tournament will take the top four teams from each division in an eight-team tournament, moving straight to the Sanford Pentagon. The quarterfinal rounds begin Feb. 25 and Feb. 26.

Season Tickets and A-Club Membership
Augustana Athletics would like to remind A-Club members that the renewal deadline for the upcoming season is June 30. The renewal deadline is critical to ensure members have first right at their season ticket seat locations from 2019-20.

Memberships can be renewed online HERE. Fans who are not an Augustana A-Club member and are interested in joining this year can find information HERE. General ticket information, including season tickets on sale now, can be found HERE.

A-Club members will see few changes to their membership this year, and Augustana Athletics is excited to continue to offer great benefits:

Other benefits offered to members at varying levels include named and reserved parking at both Kirkeby-Over Stadium and at the Sanford Pentagon will provide the closest parking at the venues and all members regardless of level will continue to have their name listed in the game programs and online.

To learn more about the Augustana A-Club, including renewing your membership or joining for 2020-21, visit GoAugie.com/AClub or contact Director of Athletics Annual Giving, Emily Punt, at emily.punt@augie.edu or 605-274-5236.