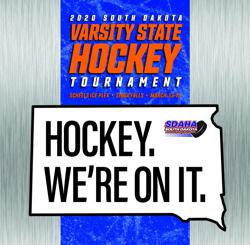 The players, families, fans and tournament officials will use more than 250 hotel rooms for the 3-days of the tournament, plus food, gas and any other activities they will in enjoy while in Sioux Falls. Adam Gorra, President of the SFYHA, says hosting the tournament takes considerable effort, but with benefits to the organization.

Three games will be played on Friday, March 13 with the first game beginning at 9:05 a.m. After the final game is played at 4:35 p.m., an awards ceremony will take place at the Southeast Tech HUB Auditorium where players will be awarded for academics, all-state teams will be announced and League Champion awards will be distributed. Emcee for the evening will be Adam Gorra. The evening will wrap up with guest speaker Ryan Siirro, current SFYHA Bantam coach and former Sioux Falls Stampede player and NCAA Division 1 Princeton Tiger.

Tournament play resumes on Saturday, March 14 at 11:35 am. All winning teams will advance to Championship Sunday.

Sunday, March 15 three games will be played. The consolation game at 9:35 a.m., third place game at 12:35 p.m. and the 2020 SDAHA Varsity Championship game at 3:35 p.m. where Mayor Paul TenHaken will drop the puck. All games throughout the tournament will be televised on Midco Sports Network.

The last time the Sioux Falls Flyers hosted the SDAHA Varsity Hockey Tournament was in 2003 at the Expo Ice, “We’re looking forward to a memorable weekend of great hockey and comradery, says Penny Malwitz tournament director.