SIOUX FALLS, S.D. – A special doubleheader takes place at the Sanford Pentagon on Nov. 15. The South Dakota State wrestling team hits the mat against the Binghamton University Bearcats in a dual match at 5:30 p.m. and the SDSU women’s basketball program faces Dakota Wesleyan at 8 p.m.

About South Dakota State University Wrestling
South Dakota State was 3-10 overall and 2-7 in the Big 12 Conference last season. This will be the second season for SDSU head coach Damion Hahn. Last season, the Jackrabbits sent Henry Pohlmeyer to the NCAA Wrestling Championships for his second consecutive appearance. SDSU placed one champion, Zach Carlson, at the season opening Bison Open on Nov. 9.

About Binghamton University Wrestling
The Bearcats are coached by brother duo, Kyle and Jasen Borshoff. This will be Kyle’s third season as head coach, who led Binghamton to 8-2 in the EIWA conference and to a 6th place finish at the EIWA Championship. Last season the Bearcats sent three wrestlers to the NCAA Championships, two of which, Zach Trampe and Anthony Sparacio, return this year.

Upcoming Events at the Pentagon
The Pentagon will host the NSIC Volleyball Tournament from Nov. 22-24. On Dec. 8, the SDVBCA All Star Match will take place on Heritage Court. The University of South Dakota takes on the University of Northern Colorado in a nonconference men’s basketball game on Dec. 20.

Conference diversity
The Pentagon has hosted schools from more than a dozen different NCAA Division I conferences in its six-year history. The Big 12, Big East, Big Ten, SEC, Pac 12 and WCC have all sent teams to Sioux Falls.

*Be social
Use the hashtag #SanfordSports during the game to be a part of the conversation.

Parking and accommodations
Parking at the Sanford Pentagon is available on the east, west and north side of the facility. Need to eat? The Pentagon has a variety of options for food and beverages, including several upgrades for the 2019-20 season. Check out Slam Dunk: all your favorites, including pizza, nachos, hot dogs and popcorn; Jump Shot: this new spot features coffee and espresso drinks plus a full-service bar; Sixth Man Sweets: satisfy your sweet tooth with candy, ice cream, Icees and cotton candy. Also, across the street is the Blue Rock Bar and Grill. Want to stay close to the arena? The Fairfield Inn & Suites is across the street. The venue also has an official team store and several ATM stations.

Special features
The South Dakota High School Basketball Hall of Fame calls the Sanford Pentagon home. Visitors can enjoy the free exhibit that includes historical photos, records and memorabilia. In fact, the entire facility is a trek to a different era. The Pentagon took great care to include old photos, jerseys and mementos throughout the entire venue. One of last year’s new elements highlights former high school championship teams that are available for viewing on the second level. 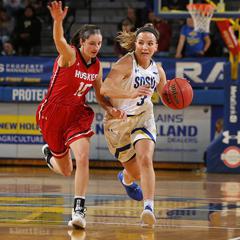